Its thematic approach takes historical chronology into account. Indeed, beyond all their differences, the people who have settled in France since the 19th century have encountered the same hardships, undergone the same decisive experiences and held the same hopes.

The visit is organized in nine thematic sequences.

There are a variety of reasons for leaving: political, economic and/or cultural. The choice of France is the result of an attraction following a long history linking the two countries, its geographical proximity, an urgent need to escape, the desire for freedom, and above all an opportunity to find work. Thus emigration is a phenomenon in which the factors go beyond the individual but which is experienced on an individual level.

Objects belonging or having once belonged to immigrants who came to France are displayed in these cases and tell us about the reasons for their departure, why they chose France, the knowledge and skills that they brought with them: the “small Spanish Civil War hammer”, the Buddhist beads or the carefully packed suitcase.

Faced with the State 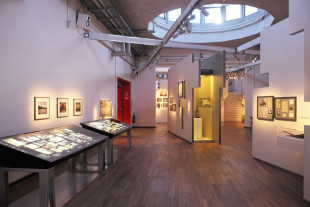 In the mid 19th century, a passport sufficed for foreigners to settle in France. But very soon the State began to control its borders and tended more and more to supervise foreigners. There was never a linear evolution in the legal status of the foreigner: a tightening up in times of crisis alternated with an opening up when the country was in need of labor.

World War I marked a turning point with the introduction of the identity card and the beginning of organized recruitment.

In 1945, the creation of a National Office for Immigration symbolized the birth of a real public policy. But in practice there was latitude in the scope of the law. During the 1920s or the post-war boom, the State relied on private initiative. In some cases, it allowed foreigners to enter without any control. And migrants try to use loopholes in the law’s application to enter France and live there outside the legal framework. 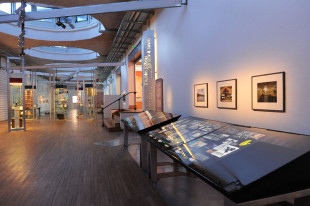 Whatever the period, public opinion reinvents the figure of the foreigner who cannot be integrated.
At the end of the 19th century, the ancestral fear of the other, of the one who comes from somewhere else became widespread. The establishment of nation states, the consolidation of the French Republic, the opinions of the press and the elites reinforced xenophobic ideas that stigmatized the foreigner as the “opposite of a citizen”. The stereotypes that were established then have durably structured the representations of immigration: there are too many foreigners, they take our jobs, they transmit illnesses, they are potential delinquents, they are a political threat and they are irreducibly different. Anti-semitism and the racism that targets colonial migrants also fuel this rejection.

With each wave of immigration, the grievances return; during each crisis tensions are exacerbated. From one period to the next, nevertheless, there are French people who know how to turn their backs on xenophobia and choose solidarity in its place.

One does not erase the past by leaving one’s country. Every migrant brings along a mother tongue and a culture. Between the desire to recreate here the life there, and the feeling of being suspended between two worlds, immigrants keep their material and immaterial ties with their country of origin. These ties shape their new life in France. Contemporary art is one of the main focuses of the constitution of the collections of the Museum of the History of Immigration (Musée National de l’histoire de l’immigration). Among a new generation of artists, mostly of North African origin, personal and family history co-exist with the events of history. This is the case of Kader Attia, born in France of Algerian parents, who presents a very intimate project with Correspondances (Correspondences). This installation illustrates the life of the members of his Algerian family separated for sixteen years.

A Place to Live 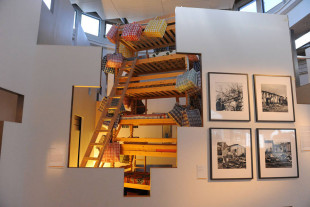 When they arrive, without the means or plans for lodging, migrants usually end up in the poorest housing. Solidarity among their peers contributes however to making it possible to live there. Access to proper housing will later mean for the migrant progressive establishment in the host society. Starting in the 1950s, the State initiated an active policy for low-cost housing. For the French people, the time for comfortable low-rent housing (HLM) had arrived. Hostels were built for isolated immigrant workers. Progressively, families gained access to housing estates. Hostels are representative of the habitat that is the most emblematic of the condition of single immigrants. Here, objects together with their owners’ stories and personal accounts open a dialogue with works belonging as much to the 19th century as to contemporary creation. 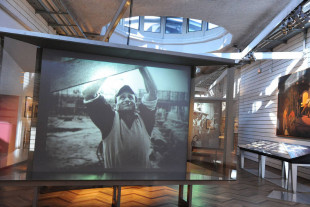 Since the 19th century, immigrant women and men have participated in the construction and modernization of France. Periods of crisis and unemployment do not put an end to the employment of immigrants. Very often low salaries, long hours, tough working conditions, stigmatized jobs and low vocational advancement are the lot of foreign and colonial workers. However some of them escape this situation by rising through the ranks or developing an independent activity. The working world is also one of solidarity, sometimes including struggles alongside French workers for better living conditions, salary increases and equal rights. Migrants progressively build strong ties with the new country. Daily life and the workplace are opportunities for encounters and exchanges. For some, participation in collective struggles, for others joining the army, or even family life, sometimes a result of marriages outside the community, speed up the process of taking root in the host country. For the youngest of them, who come with their parents, from the 1920s school becomes an essential place for socialization and integration. Since 1889, access to French nationality is also a strong element of attachment. Generation after generation, this process of taking root shapes a country with a diverse population. 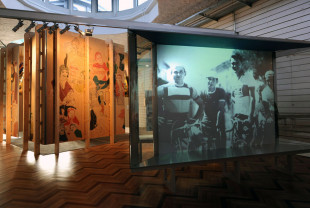 At the end of the 19th century, foreigners accompanied the birth of French sports. In the beginning, the newcomers largely played among themselves to forge an identity and reinforce community ties.

Starting in the 1930s, with the rise of workers’ leisure, encounters with the French multiplied. Between fellowship and confrontation, sports acted as a bridge to the host country; it was an introduction to its codes, manners and social mores. For some, success in sports is also a way of escaping life as a worker and the most gifted among them cherish the dream of being French heroes.

The role the press plays in the construction of representations of the athlete of foreign origin is fundamental and ambivalent. The story it tells is nurtured by stereotypes that send the champions back to their origins while tending to transform them into “heralds” of integration. 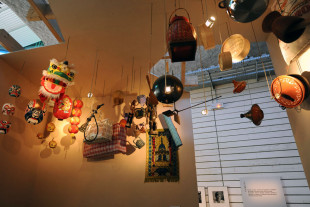 Two centuries of immigration have made France a place of multiple encounters and cultures. Cultural traditions, languages, songs and stories, religions practiced "the way they are at home", food or major festivals are essential for migrants, who try to transmit to their children some part of what constitutes their identity. By doing this, through daily exchanges and mutual influences, they contribute to the perpetual renewal of a common and shared culture.

Exiles and migrations also reinforce the movement of foreign artists and writers who have always enriched the cultural heritage of France. Zineb Sedira, born of Algerian parents, has lived and worked in London since 1986. In the video triptych Mother Tongue (2002), the artist, her mother and her daughter dialogue, two by two on three screens. But communication seems to have broken down between the granddaughter and the grandmother who cannot understand each other’s language.